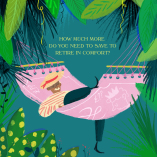 A picture of wealth

The post-war baby boomer generation is often seen as a ‘fortunate’ generation, holding the majority of the wealth in this country.

Many in this generation have benefited from rising property values, gold-plated final salary pensions and booming stock markets during their working lives.

As a result, those older members of society tend to hold a lot of wealth.

A set of new reports – funded by the Institute of Fiscal Studies (IFS) Retirement Savings Consortium and the Economic and Social Research Council – shows that this wealth, whether held in housing or in financial assets, is not in general drawn down in retirement.

We might imply from this finding that the wealth held by older people today is likely to become the inheritance received by the younger generations tomorrow.

There were some interesting findings when looking at the use of wealth by current retirees in England.

Perhaps unsurprisingly, the majority of wealth is tied up in the value of the main residential property. 80% of over 50s are homeowners and the majority would not be expected to move home before they die.

The study found that of the slightly over two-fifths who would be expected to move, few are moving for financial reasons, but something like two-thirds of house moves do release some wealth.

Sticking with property wealth, the research shows that around one-in-six of those aged 55-64 own a second home. This frequency of second home ownership changes very little at ages 70 and over, increasing only slightly in the late 50s and 60s.

Those in their late 50s and 60s tend to shift second home ownership towards income-generating properties.

The studies also found that financial wealth is on average drawn down, but only slowly. On average, individuals are drawing just 31% of net financial wealth between the ages of 70 and 90. Even for individuals in the top half of the financial wealth distribution, who we might expect to draw down and spend more, are only withdrawing their wealth at a rate of 39% during this twenty year period.

Commenting on the research, Steve Webb from Royal London said:

“​This report confirms that the vast majority of pensioners who have saved through their working life are cautious with their money and leave unspent wealth at the end of their lives. This is great news for those who believe in ‘pension freedoms’.

“The IFS research suggests that the biggest concern about pension freedoms is likely to be about excessively cautious retirees spending too slowly than it is about reckless retirees blowing their pension savings on lavish living.”

Another finding pointing towards the availability of an inheritance for the younger generations is most people not experiencing large end-of-life expenses that would use up remaining wealth before they died.

Looking at a sample of those who died between 2002/03 and 2012, only 7% received help with daily activities from a privately paid employee in the two years prior to death.

The research also found that one in five stayed in a nursing or residential home for some length of time before death, with only 7% resident for longer than six months. Not all will have paid for their own care.

The patterns of bequest evidenced by this research made for interesting reading too.

Married couples nearly always bequeath only to their spouse. This is in line with our experiences, with the study finding the surviving spouse then most often bequeaths all of their assets to their children. This happens in 60% of cases for those with financial assets to pass to the next generation.

Only 16% of those with financial assets and no surviving spouse directly left any assets to grandchildren, despite 74% having grandchildren who could have received an inheritance. This research offers a useful insight into how wealth is being used in retirement today. But what about in the future?

Because many working age people expect to draw on non-pension wealth to provide money in retirement, housing wealth could become a bigger factor in determining future spending in retirement.

With future retirees expected to have lower pension incomes than those of current retirees, it could become more normal to draw higher levels from housing wealth in the future. It is currently those with high housing wealth, and those with the greatest housing wealth relative to their incomes, who draw most on their housing wealth when they move.

Rowena Crawford, an Associate Director at IFS and author of the set of reports, said:

“Older people do not draw on their wealth much during retirement. The majority of homeowners do not move or access their housing wealth, and even financial wealth is drawn down only slowly. This means that most wealth held by retired people is likely to be bequeathed to future generations, rather than spent.

“This will have implications for the level and distribution of resources among current working age individuals, particularly those with wealthy parents and few siblings.

“Given the increased freedom people now have over how they spend their pension wealth in retirement, carefully monitoring how the use of wealth evolves in future will be important, both for the living standards of the retirees themselves, and also for younger generations.”