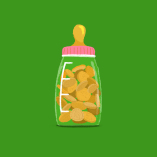 The different roles played by men and women when they become parents makes an important contribution to the gender pay gap.

When it comes to paid work and childcare responsibilities, men and women tend to take on different roles after becoming parents.

Historically, it has been argued that the gender pay gap comes from pre-existing gaps in earnings within opposite-gender couples, because men already earn a little more than women, on average, before becoming parents.

This existing gender pay gap is therefore perceived to drive decisions around who reduces their amount of paid work and who takes on more responsibility for childcare, once children are born.

However, new analysis has proven that this divide occurs even when the mother enjoys the highest household wage before becoming a parent.

Women earn more than men in 38% of heterosexual couples, where both parents worked before parenthood.

In these couples, 13% of higher-paid women still leave paid work after their child is born, compared to just 3% of lower-wage male partners.

Where higher-paid women do continue with paid work after becoming parents, there is a significant reduction in the number of hours worked, falling 26% on average.

In contrast, the analysis shows little or no reduction in the paid hours worked by fathers, even where they earn less than their female partners before their child is born.

During the pandemic, this trend appears to have continued.

Even where mothers were the primary earners before the pandemic, their paid work was still interrupted for child care responsibilities when schools closed; more so than their lower-earning male partners.

The findings accompany new research published alongside the ongoing Institute of Fiscal Studies (IFS) Deaton Review of Inequalities, funded by the Nuffield Foundation.

According to the report, the arrival of children is a crucial moment in the evolution of gender career differences over the life cycle. Women’s employment rates jump sharply down from about 90% to 75%, with average weekly hours for those remaining in paid work falling from 40 to less than 30.

Becoming parents is also the start of a long period over which women’s hourly wages stagnate. This stagnation is partly the result of working fewer hours, which tends to prevent wage progression.

For men who become parents, the paths of employment, hours, wages and earnings are largely uninterrupted.

The study found that this is not merely the exacerbation of pre-existing career differences.

In families where men were the primary earners before childbirth, mothers’ employment rates and hours of work fall by 22% and 33% respectively when children arrive.

Even where women were the primary earners before having children, their employment rates and hours fall by 13% and 26% respectively.

Alison Andrew, a Senior Research Economist at IFS and an author of the report, said:

“The gendered roles of men and women in paid work and childcare after heterosexual couples start families play a crucial part in the development of the gender pay gap, and gender differences in careers more generally. How these parents divide up paid work and childcare cannot be straightforwardly explained by (smaller) pre-existing differences in their career trajectories.

“Even where the mother was the main earner before having a child, she is much more likely to give up work or reduce her hours after becoming a parent than is the father. So the roots of these gender differences cannot all be traced back to which parent was in the better position, career-wise, to be the primary breadwinner.

“Attempts to understand and address gender pay gaps must consider the role of social norms and maternity and paternity policies – and the links between the two – in driving men’s and women’s roles after childbirth.”

“Decisions couples make about how to balance paid employment and parenting are not based solely on who earns more, but they do have long-term consequences for mothers in terms of salary progression and a widening of the gender pay gap.

“Policies designed to address that gap need to be based on understanding of the role of social norms in driving decisions made by parents, which are evident in how mothers have picked up the additional parenting demands resulting from recent school closures. Parental leave policies and employer practices primarily focused on women will reinforce such effects.

“Policy also needs to take account of wider systemic problems in the labour market that see part-time employees, who are much more likely to be women, financially disadvantaged compared to those who work full-time.”