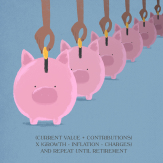 to live on a

Have you ever heard of ‘tax freedom day’? It’s a concept devised and calculated by the Adam Smith Institute, designed to measure the point in the year when we notionally stop paying taxes and start putting money into our own pockets.

The later this day falls in the year, the greater the tax burden we suffer from every source. This year, HM Treasury eats up the first 162 days of our earnings, with tax freedom day falling six days later than the year before, on 17th June.

But what about measuring how long it takes for the average UK full-time employee to earn the equivalent of a full year of state pension payments? This is the challenge taken on by insurer Aviva in new research designed to highlight the potential gap faced by those who rely solely on a state pension income in retirement.

We all know that living on only a state pension in later life is unlikely to result in a particularly high standard of living. Despite recent state pension reforms, including the introduction of a flat-rate pension which is less dependent on the size of your career earnings, it still offers pensioners a relatively paltry amount.

The research worked out that it takes until Friday 25th May for the average full-time employee in the UK to earn the equivalent of a full year of state pension payments. Look at this another way; if you were told that you wouldn’t receive another penny of income from June onwards each year, what would that mean for your household budget and expenditure?

Aviva’s calculations show that it takes the first 101 working days of 2018, excluding Bank Holidays and weekends, for the average full-time employee in the UK to get paid the equivalent of the full state pension for the year.

Imagine what this would mean for your standard of living if you had no other sources of retirement income. How would you pay for the other 220 days until the end of the year?

Living on almost of a third of your current earnings is unlikely to be viable for most people. The financial position is exacerbated if you’re a higher earner; keep in mind this research considers average earnings.

The clients we work with tend to be saving towards other sources of income in retirement, including private and occupational pension pots. But Aviva’s research found that nearly one in five working adults believe the state pension will be their main source of retirement income.

There’s been a big uptick in people making their own provision for retirement income since the introduction of workplace pensions and automatic enrolment into such pension schemes. More than 9 million people have started saving into a pension as a result of this government policy since it was first introduced in 2012.

That minimum contribution level goes up to 8% in April 2019, although that still might not be high enough to sufficient fund a target level of retirement income. And of course the self-employed are not automatically enrolled into a workplace pension, instead needing to fend for themselves in the mission to save for retirement.

Commenting on the research, Alistair McQueen, Head of Savings & Retirement at Aviva, said:

“How many of us could survive until 31st December with the amount of money we have already earned this year – or live for a whole year on just £8,546?

“The state pension is a national treasure and the bedrock of many retirement plans. However, most of us will find that it isn’t enough to meet all our financial needs in retirement.

“Auto-enrolment has helped the UK take a step forwards to saving more via workplace pensions, but the threat of financial struggles in retirement hasn’t gone away, especially for the self-employed.

“Saving more into a pension means having to make the rest of the monthly pay cheque stretch further, but a far tougher challenge will come when you’re no longer earning and have a much bigger income drop to deal with.

“The state pension can only replace the average worker’s income for 101 working days a year. Thanks to employer contributions and tax relief, more money goes into your workplace pension each month than comes out of your salary, so we urge people to think of the future and play the long game by putting saving first.”

If you’re thinking about your own retirement and want to make sure you have enough, please do get in touch. We can help you calculate which sources and levels of income you can expect to receive in later life, before advising on a strategy to maximise retirement income from all sources, so you can live comfortably when you stop working.