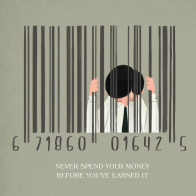 If there’s one ‘product’ that generates excessive profits for banks, it’s overdraft fees.

UK banks rake more than £2bn a year from their overdrawn customers.

But radical new regulations look set to bring an end to banks charging higher prices to their customers who find themselves in this position.

The Financial Conduct Authority (FCA) has announced a package of measures, which form part of its high-cost credit review.

The proposals will eventually change how banks charge their customers for use of an overdraft facility, bringing an end to the practice of charging higher prices for unarranged overdrafts.

According to the FCA, banks made more than £2.4bn from overdraft charges last year.

The regulator found that banking customers living in deprived parts of the country were more likely to be impacted by overdraft fees.

In some cases, overdraft charges can be more than ten times higher as the fees for payday loans. In order to tackle this issue, the FCA is planning to introduce new rules for the overdraft market.

These rules would ensure that the price for each overdraft will be a simple, single interest rate, removing the option for banks to charge fixed daily or monthly fees on overdrafts.

This move is likely to favour customers with smaller overdrafts, who will face lower charges when expressed as an interest rate rather than a fixed monetary charge.

The FCA is also planning to tackle the highest costs in the overdraft market by preventing firms from charging higher prices when customers use an unarranged overdraft.

They plan to ban fixed fees for borrowing through an overdraft, require that arranged overdraft prices must be advertised in a standard way, issue new guidance to confirm that refused payment fees should reasonably correspond to the costs of refusing payments, and tell banks to do more to identify overdraft customers who are showing signs of financial strain or are in financial difficulty.

The proposals follow a consultation from the FCA published in May. Since then, the FCA has already introduced reforms designed to help all banking customers better engage with and understand their overdraft facility.

The rules already introduced require banks and building societies to provide digital eligibility tools so they can check if a cheaper overdraft facility is available elsewhere.

They also introduced overdraft charge calculators that translate interest rates into pounds and pence, and alerts to display overdrawn balances at cash machines.

“Today we are proposing to make the biggest intervention in the overdraft market for a generation. These changes would provide greater protection for the millions of people who use an overdraft, particularly the most vulnerable.

“These changes would make overdrafts simpler, fairer, and easier to manage. Our consultation is informed by our analysis of retail banking business models, and how these are evolving in the face of significant technological change.”

“We are extremely pleased to see the FCA’s plans for robust new rules on unauthorised overdraft charges. These should help to disrupt the toxic “debt spiral” effect that overdrafts can create, trapping people in a persistent cycle of overdraft debt.

“Requiring firms to intervene earlier and more meaningfully when their customers show repeated use of overdrafts is hugely important, too.

“In a survey of our clients last year, we found that nearly four out of five (79%) of our clients who had used an overdraft were constantly overdrawn in the year before they sought help from us. So while the new measures are very welcome, we think that more work is needed to establish how to reduce reliance on overdrafts in practice, and to understand the link between persistent overdraft use and problem debt.”

At the same time as proposing new rules for the overdraft market, the FCA has published the results of its review into the retail banking market.

They have made new rules designed to strengthen protections for consumers using home-collected credit, otherwise known as doorstep lending, but also catalogue credit and store cards.

As part of its work to help consumers get essential household goods and less expensive forms of credit, the FCA has also published finalised guidance for registered social landlords.