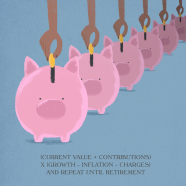 As Financial Planners, we’re fascinated by the spending habits of our clients and the wider population.

There are some broad rules of thumb which can help when it comes to planning expenditure, but we are all different, with differing goals and priorities for how our money is allocated.

With budgeting as the cornerstone of good financial planning, we encourage all of our clients to get a good handle on where their money is going each month.

Without this understanding and control over your spending, your progress towards longer term financial goals is unlikely to be as swift as you might like.

Now that we are at the start of a brand new year, it’s a great time to review not only your budget for the month, but how your money has been spent during the past year.

Some new research has found that a lot of us have cut back on our spending in 2018.

The research, which forms part of the latest Lloyds Bank Spending Power Report, found that 58% of people have cut back on their spending in 2018.

And in 2019 this trend looks set to continue, with half of us expecting to spend less next year, by an average of £164 a month.

The report makes interesting reading as it looks at how people changed their spending across the year.

It found that younger people took a lead in tightening the purse strings, with 61% of 18-34 year olds changing their spending behaviour in order to save some money. This compared with just under half of over 55s.

Younger people were also found that have managed to save the most of their expenditure, with 18-24 year olds cutting back by an average of £149 a month.

The most frugal spenders were found in the North West, where more than two in three people were cutting back in 2018. Other savvy parts of the country included the West Midlands, Scotland and South East.

Least savvy were those in Yorkshire and Humber, who were found to have cut their spending by the least in 2018, with only half reporting spending less this year. This region of the country also reported the lowest average reduction in spending, cutting back £86 a month.

Looking at where spending was cut back in 2018, there seemed to be reductions across the board.

Both spontaneous purchases and grocery shopping faced cuts. Reductions were also made to the amount spent on leisure activities.

Clever ways of saving money included the use of coupons and loyalty discounts. 43% of those surveyed collected and used vouchers from retailers, and nearly a quarter looked for discounts on savings websites.

“Although 2018 has been a year of uncertainty for consumers across the UK, the majority are taking positive steps towards keeping back cash, showing that they recognise the need to take action and engage with their finances.”

“Taking the time to research your purchases to obtain the best deals possible can ultimately save you a pretty penny.”

If as you review your spending habits in 2018 and start planning ahead to the rest of 2019 you think you need some help, do get in touch.