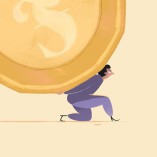 Interest rates could rise at the start of next year.

Interest rates could rise in the first half of 2022, assuming the economy recovers by then.

An earlier rate rise could happen if the jobs market recovery is faster than expected, according to Dr Vlieghe.

Following the comments, gilt yields rose in expectation of a stronger economic recovery. Pound Sterling also strengthened against the US Dollar and euro.

Dr Vlieghe said he agreed with the current Bank of England forecasts, suggesting economic growth of 7.25% in 2021. However, he thinks unemployment could be higher than the Bank forecast when the furlough scheme ends in September.

Speaking to students at the University of Bath, he said:

“In that scenario, the first rise in Bank Rate is likely to become appropriate only well into next year, with some modest further tightening thereafter.”

However, if the jobs market is more robust than expected in the first part of next year, the Bank might need to move faster on higher interest rates.

“It would probably take until the first quarter of next year to have a clear view of the post-furlough unemployment and wage dynamics, so a rise in Bank Rate could be appropriate soon after.”

The interest rate forecast follows comments from another Monetary Policy Committee member, Michael Saunders, who said earlier this week that a rate hike might not happen for another 18 months.

Turning to price inflation, Vlieghe said he doesn’t think interest rates will need to go up by much to keep inflation close to its 2% target. He also pointed out that there are risks associated with hiking interest rates too soon.

According to the Bank of England, price inflation as measured by the Consumer Prices Index (CPI) is likely to exceed 2.5% by the end of 2021 because of comparisons with falling prices at the start of the pandemic. But longer-term price inflation is unlikely to materialise.

There are also some downside risks to consider, including new coronavirus variants taking hold and derailing the economic recovery, which could lead to higher unemployment and the need for further monetary stimulus.

“At that point, negative interest rates absolutely become a relevant and important tool.”