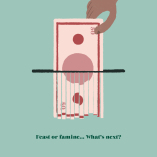 One of the many benefits of working with an authorised and regulated financial services firm is access to the Financial Services Compensation Scheme (FSCS), in the event of the firm being unable to meet its financial obligations.

The FSCS was established by the government, but it is entirely funded by a levy on regulated firms.

Each year, we find out how much the FSCS is budgeting to meet expected compensation costs. The latest FSCS annual budget is eye-watering and indicative of wider regulatory failure.

This levy represents a 48% increase on last year, and means that regulated businesses (such as ours) will pay considerably more to fund compensation payments to the customers of failed firms.

The Financial Conduct Authority is planning to invoice the largest 1,000 regulatory fee payers a 50% advance towards the levy expected in March 2021. This action is designed to ensure the FSCS has sufficient funds to pay claims before the main regulatory invoices are issued in the summer.

Last November, the FSCS warned in its outlook report that compensation costs for last year were higher than originally anticipated. The increased costs were largely due to the collapsed mini-bond firm London Capital & Finance, as well as higher amounts paid out in pension compensation.

The FSCS raised an interim levy of £92 million in response to these higher than forecast costs.

With such massive compensation costs forecast, some of the levy paying classes will breach their funding limits again this year. Another class of levy payers, known as the ‘retail pool’ will have to chip in an additional £252 million as a result.

While the situation in relation to FSCS funding is dire, they are also forecasting even higher levels of compensation in the future, because more firms are going out of business due to the impact of Covid-19.

There is also a further rise in complex pension advice claims, and the failure of Self Invested Personal Pension (SIPP) providers.

“Ongoing trends in a number of classes, and the widespread economic impacts of Covid-19, mean we are anticipating an increase in firm failures over the next financial year. This will likely lead to a rise in the volume of claims, many of which are complex, and therefore an increase in the levy.

“This annual levy ensures we can protect consumers, which helps to improve market stability and increases confidence in the finance sector. But we appreciate that the levy is far too high and that increasing costs could put pressure on firms’ finances.”

“In any other sector, a forecast for compensation of over £1bn would be the focus of national scandal – £1bn of compensation represents £1bn worth of financial loss, emotional stress and economic hardship for thousands of UK consumers.

“We cannot continue to normalize this level of loss, accepting that the compensation scheme will hopefully pick things up on the other side, every single person who has had to claim on the FSCS has received a poor outcome that it would be better to avoid. This is a further sign that the cost of compensation is truly out of control.

“This cost is a symptom of a system that fails both customers and the industry.”