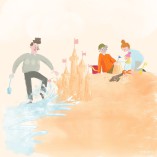 Many of us dream of living by the sea, either now or in retirement.

A new study has revealed Britain’s most expensive seaside towns, with Sandbanks in Dorset topping the list.

Sandbanks was named the most expensive seaside town in the latest coastal towns review from lender Halifax, with average prices coming close to £1 million.

The review tracks house price changes in 191 seaside towns across the UK.

Salcombe was the most expensive seaside town in the review last year.

The UK’s top ten most expensive seaside towns are dominated by those on the south coast, including Padstow in Cornwall, Lymington in the New Forest, and Aldeburgh in Suffolk.

According to the review, the average British seaside home costs £287,087, up 8% in the past year.

The increasing popularity of seaside homes is partly driven by the pandemic, where changing property preferences encouraged homeowners to flee cities and relocate to more picturesque areas.

Port Bannatyne in Scotland saw the largest price rise over the last five years, increasing 56% to £111,717

“Our ongoing love affair with living by the sea shows few signs of abating.  Homes on the coast have long attracted a premium price, and this was no different in 2021, with the move towards working from home being an ongoing influence is where people choose to live. The average seaside home cost £287,087, up 8% on the previous year.

“Whether it’s a lifestyle sought, the scenery or the sea air, when it comes to buying homes; we really do love to be beside the seaside. The biggest beneficiary of that desire last year was Millport on the Scottish island of Great Cumbrae, and over the last 5 years it was Port Bannatyne on the Isle of Bute.

“The seaside towns that attract the highest prices overall are dominated by locations across the south coast, with Sandbanks in Dorset taking the title of most expensive seaside town from last year’s winner, Salcombe in Devon. Both towns have average house prices of over £900,000.”