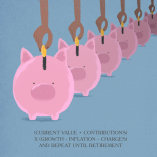 With an ageing population, the cost of adult social care is rising for local authorities across the country.

Despite central government guidelines for councils, issued and updated by the department of Health and Social Care, families still often struggle to find

This social care postcode lottery was highlighted in a new study which found that people needing care in some parts of the country are four times more likely to be fully-funded by their local authority.

The study, by equity release adviser Key, looked at the 1,310,000 requests made each year for adult social care by the over-65s.

They submitted a Freedom of Information Request to the 205 councils who are currently responsible for funding social care for 568,867 over-65s.

19 councils responded to the FOI by saying they were unable to provide information on the level of funding for 93,324 people, or 16% of the total.

According to Key, the average for England, Scotland and Wales hides a wide range of regional differences.

Local authorities in the East of England were found to be the most likely to provide full funding. 68% of applicants in this part of the country were fully-funded, which is around four times the average in Wales and the East Midlands, where 16% and 17% respectively are fully-funded.

The study also discovered that only 6,882 retired homeowners are currently using deferred Payment Arrangements to pay for their social care.

These are arrangements with your local authority that allow you to use the value of your home to pay for care.

They work by the council paying care home bills on your behalf, until you choose to sell your home, or it is sold when you die, at which time the debt to the local authority is repaid.

Looking at future planning for social care costs in later life, the research found that only 21% of over-55s have made any provision for care.

The majority of those asked told researchers they would use savings and investments to pay for the cost of their care, if needed. 40% thought their pension income would be enough to cover care costs in later life.

Nearly one in five surveyed said they would need to use the value tied up in their homes.

With the over-65s currently owners of unmortgaged property valued at £1.1 trillion, it seems likely that equity release or downsizing to release property wealth will be a popular option in the future.

Will Hale CEO at Key said:

“With 1.31 million requests for care and support each year – a figure that is only going to climb – as a country, we face some tough choices around what

we can afford to offer.

"Local authorities and Government are under pressure and while the upcoming Green Paper should provide some clarification, the likelihood is that many will need to find some if not all the money needed to pay for care.

“While few people want to consider the prospect of needing care and how they might meet this cost, it is vital that they do. Starting to think about care

funding early, speaking to their families, considering all the funding options available and getting good advice is essential.

This will help people to crack the care code and ensure that they make considered sustainable choices about what is a very emotive topic.”

We are still waiting on the publication of a Green Paper from the government, proposing reforms to adult social care funding and the possible reintroduction of a lifetime cap on care costs.

This was originally announced in the March 2017 Budget statement, although the rising cost of care makes this subject politically sensitive and ministers are unlikely to make proposals which would result in lost votes.

With evidence of a postcode lottery for adult social care funding, it’s important to work with a professional adviser who understands the various options for funding care in later life.