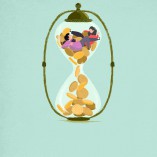 New research suggests the cost of living crisis could prompt older millennials to burn £2.4 billion a year in inherited cash during the next two years.

Spending this inheritance would help keep pace with rising bills as more people put their property dreams on hold.

Higher living costs are now the primary expense anticipated by most people regarding how they will spend their inheritance.

The study of those aged 39 to 41 by Barclays Wealth found that spending inheritance on living costs has overtaken using the money as a deposit on a new home or to start a new business.

On average, older millennials told the researchers they expect to spend 61% of money gifted by relatives on energy bills and other living expenses.

The average gift anticipated from family members is £2,000 over the next couple of years, but rising living costs will take up around £1,220 of that inheritance, a total of £2.4 billion.

The survey found that more than three in four people aged 40 have already received some form of inheritance from their parents.

Clare Francis of Barclays Wealth explained that the findings showed that older millennials, some with young children, are feeling the pinch. She said:

“The average 40-year-old has high monthly outgoings. Add to that the pressures of inflation and soaring energy bills, and you have a section of society that is really struggling.”

With household incomes forecast to decline by 10% over the next two years, due to soaring price inflation and slower wage growth, families might expect to see their income cut in real terms by £3,000 in this time.

One inevitable consequence of these real terms pay cuts is deferring property purchasing ambitions, which inherited monies can often help fund in adulthood.

Parents and grandparents might increasingly decide to make gifts during their lifetimes to help alleviate the cost of living crisis, and so they can see their offspring ‘enjoy’ use of the funds.

The survey from Barclays Wealth found that more than a third of parents of 40-year-olds said they might need to give money to their adult children to help cover living expenses.

Where inheritances are being paid earlier than initially anticipated, it is essential to consider your own Financial Planning first, to reduce the risk of running out of money during your lifetime.