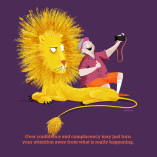 Oil prices have reached their highest level since November 2014, driven higher by a combination of factors.

But what’s driving up the oil price and can this price rise by sustained?

When the price of a commodity rises, it’s usually due to increased demand, limited supply, or a combination of the two factors.

On the supply side, one factor behind the recent price rises is the decision by US President Donald Trump to withdraw from a nuclear deal with Iran.

It’s unlikely Trump’s latest temper tantrum will have the same impact on global oil supplies though. The European Union remains committed to the Iranian nuclear deal, working to keep this agreement alive and not impose fresh sanctions.

Regardless, any supply gap created as a result of fresh sanctions on Iran could be closed by Saudi Arabia, who have promised international markets they are ready to step in.

Still on the supply side, production cuts by Opec-countries have had an inflationary impact on the global oil price for nearly 17 months now. These cuts were led by Saudi Arabia and Russia, who together generate around 40% of global oil supply. Opec cuts are under review as to whether they will remain in place past the end of 2018, with a meeting scheduled soon.

On the other side of the globe, a combined political and economic crisis in Venezuela has resulted in big production cuts there. This geopolitical instability resulted in a dramatic and fast cut to supply from the oil-rich South American country.

All of this combined with ongoing tensions in the Middle East is having a big impact on the supply side and investor sentiment towards oil inventories.

Looking at the other side of the equation, a recovering global economy is helping to push up commodity demand. We might be experiencing weak economic growth here in the UK, but the International Monetary Fund is now forecasting global growth of 3.9% for 2018. At this level, it would be reasonable to expect higher prices for oil and other commodities.

Does the oil price have further to rise? In a briefing note to clients this week, investment bank Goldman Sachs said:

Goldman recently increased its forecast for returns from the commodity asset class to 8% over the next year, up from a previous forecast of 5% growth. It cites a 1-million-barrel-per-day supply gap as soon as this summer as one factor supporting further oil price rises.

One positive consequence of a higher oil price is higher valuations for companies on the commodity-heavy FTSE 100 index of leading UK company shares. Shares in London closed at a fresh record high earlier this week, pushed higher by rising share prices for oil companies BP, Royal Dutch Shell, and Tullow.