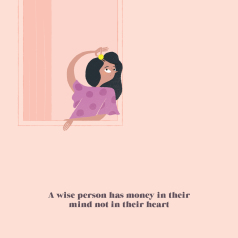 We often hear about the financial woes experienced by the millennial generation.

For people reaching young adulthood in the early 21st century, getting on the housing ladder is the biggest personal finance challenge, followed closely by the rising cost of living and absence of job security.

But what about Generation Z?

Gen Z is the demographic cohort after the millennials, usually defined as those born between the mid-1990s to mid-2000s. How are their finances shaping up?

It might not be as miserable a picture for Gen Z as it is for the millennials if some newly published research is accurate.

The research, which comes from peer-to-peer lender Zopa, found that around a third of Gen Z members have accumulated at least £1,000 in cash savings.

This finding is in stark contrast to earlier research from the Financial Conduct Authority, which found that one in 10 adults in the UK has no savings at all.

With a common misconception that younger generations aren’t planning for the future, the Zopa research suggests this is not the case for Gen Z.

Two-thirds of those questioned for the survey reported saying that saving little and often is the key to establishing good money habits.

Another recent FCA report found that compared to members of the post-war baby boomer generation, mortgage, student debt and family spending will limit the ability to save throughout working life for the next generations.

Despite this, members of Gen Z are already demonstrating that they are making saving a priority. This sound financial behaviour is starting from a young age.

And 40% of those questioned believe that saving is fundamental for creating a secure financial future.

According to the research, more than half of the younger generation are making saving their top priority, with more than £1,000 already stashed away in cash savings.

“Our latest research shows that the younger working generations are setting a new agenda for their financial futures.

With Gen Z showing they are the savviest when it comes to financial control, it may be time to wave farewell to the idea of the Bank of Mum & Dad.”

When it comes to financial planning, having cash savings as your ‘emergency fund’ is an important step.

It goes along with budgeting, dealing with short-term debt, and putting in place sufficient financial protection in case of a disaster scenario.

It’s promising to see the younger generations are taking their savings seriously, as this should offer a stable foundation of building wealth later in life.